In 1973, NBC televised the NCAA championship game on Monday night after airing it on Saturday afternoon the previous four years. The success of Monday Night Football on ABC prompted NBC to move the basketball title game to prime time where it has remained ever since. That 3/26/1973 contest featured Bill Walton scoring 44 points and hitting 21 of 22 shots as UCLA defeated Memphis State to win its 7th consecutive championship. The telecast started at 9 pm ET with Curt Gowdy and Tom Hawkins calling the game for NBC.

Last year, I compiled a 3-part historical summary of the TV coverage of the NCAA tournament from 1969 to the present. I recently made some updates and this week is an appropriate time to post the revised version.

In 1983, the United States Football League, equipped with TV contracts from both ABC and ESPN, launched a springtime pro football venture. The 12-team league kicked off an 18-game regular season schedule. Chet Simmons, former president of NBC Sports, was the league's first commissioner.

Unlike the NFL, the USFL did not blackout local TV for games which did not sell out. In an interesting twist, the USFL wanted ABC to make its instant replay footage available for referees to use on controversial calls, but the network declined.

Opening day was Sunday 3/6/1983, just five weeks after the NFL had staged its Super Bowl. ABC provided regional coverage of three games that afternoon at 3 pm ET along with a studio show hosted by Frank Gifford. Here was the ABC lineup with announcers: 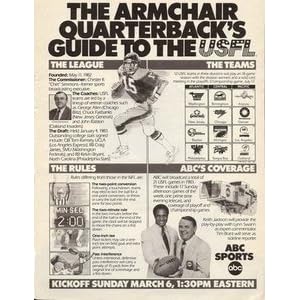 This ABC Sports promotional ad lists an opening day start time of 1:30 pm ET. Originally, ABC had planned to feature the Chicago-Washington game in that time slot and highlight the story line of Blitz coach (and former Redskins coach) George Allen making a return visit to the national capitol. But after the New Jersey Generals signed Herschel Walker on 2/23, ABC switched gears to instead showcase the Generals game in Los Angeles. The network shifted the regional telecast window later to accommodate the west coast site.

ESPN opened its schedule the following night with Jim Simpson and Paul Maguire in the booth for the Michigan Panthers at Birmingham Stallions.

ABC carried Sunday afternoon games (usually at 1:30 pm ET) with a national telecast some weeks and regional coverage on others. Jackson and Swann were the #1 announcers. On Father's Day weekend, ABC was covering the US Open golf tournament. So the network televised a USFL game on Friday 6/17 at 9 pm ET, but that experiment produced very poor ratings.

The 1983 USFL season also marked the return of Curt Gowdy to a pro football TV booth. Here is Gowdy calling a regional ABC game from Boston.

While TV ratings dwindled as the season progressed, the season-long ABC numbers exceeded original projections. However, paid attendance was sluggish and ABC would try to carefully plan its camera shots to avoid showing backgrounds of empty seats.

The league hyped Herschel Walker and ABC tended to feature the Generals early in the season, but the New Jersey squad flopped on the field, finishing 6-12.

Here are clips from the three opening day ABC games with sparse crowds evident from the first two stills):