Last week, CBS issued a press information guide on the Masters. That site contains a section on Masters history and one of the links points to an document purporting to list the year-by-year CBS-TV announcers for the Masters going back to 1956. Back in 2005, CBS had issued an earlier version of such an announcer listing. Some years ago, I compared my own independently performed research to the listings in the 2005 CBS press release and found numerous discrepancies.

The 2013 version contains a few changes from the previous one, but outside of adding the years since 2005, the updated release isn't all that different from the original.

I have no idea what research methods or sources CBS used to compile this list, but it contains so many obvious mistakes that one would be hard-pressed to take it seriously. What an embarrassing press release by CBS!

Here is a summary of the most blatant errors in the latest CBS announcer document:

History of the Masters golf tournament on TV (1956-present)

The Masters golf tournament has been a longtime spring staple on the sports TV calendar. The Augusta National Golf Club and network partner CBS have a unique relationship. CBS operates on one-year contracts and pays far less than market value for the rights. In return, Augusta National insists on approval of all announcers and dictates terms of the coverage (no mention of prize money, plenty of references to "patrons" and "second cut", no promotions for other TV programs, etc.). From the beginning, the tournament has been presented with minimal commercial interruption (just 4 minutes per hour).

Augusta National has always limited the amount of coverage by its TV partners. While it has allowed the number of TV hours to increase in recent years, it still lags significantly behind the other golf majors in this area.

Here is a look at how the coverage has evolved over time beginning with the first televised Masters in 1956. All listings of hours refer to scheduled TV coverage. Note: For detailed TV schedules and announcers by year, see my complete research on Masters TV history over at 506sports (free registration required to view).

1956 - CBS provided a half hour of coverage on Friday with one hour each on Saturday and Sunday. Chris Schenkel and Bud Palmer manned the microphones. CBS only covered holes 15-18 with all of its cameras stationary and most of them pointed at the greens.

1958 - CBS expanded its Sunday coverage to 1.5 hours and eliminated the Friday coverage.

1961 - The tournament concluded on Monday due to weekend rain and CBS added an hour of Monday late afternoon coverage.

1962 - Schenkel resumed the lead broadcast role as McKay had moved to ABC. The Masters had an 18-hole playoff on Monday and CBS provided one hour of coverage.

1966 - The Masters was televised in color for the first time. An 18-hole playoff was needed and CBS televised the end of it on Monday afternoon. This was the year that Whitaker made an on-air comment referring to the gallery surrounding the 18th green as a "mob". For this, he was banned from the telecasts by Augusta National chairman Clifford Roberts for the next several years. Henry Longhurst called his first Masters for CBS.

1967 - A strike by the American Federation of Radio and Television Artists (AFTRA) impacted the coverage. With the regular CBS golf broadcasters honoring the strike, some CBS management personnel handled the telecast along with two top amateur players who were Augusta members.

1968 - Pat Summerall broadcast the Masters for the first time and anchored the coverage at hole 18. Frank Glieber also made his Masters TV debut.

1969 - Ray Scott joined the CBS telecast crew. So did Frank Gifford who worked golf for CBS for a few years before moving to ABC.

1970 - Scott took over as the 18th hole announcer. The final 18-hole playoff took place this year and CBS added late Monday afternoon coverage for that. 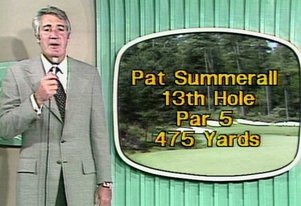 1974 - This was the last year that Scott served as lead announcer. 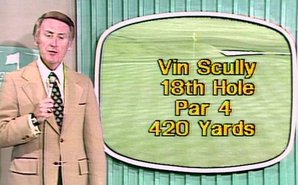 1982 - This year saw a major change as the USA Network provided Thursday and Friday coverage (2 hours live each day along with a prime time replay). This was the first ever cable coverage for one of the golf majors. The USA coverage used the CBS production crews and CBS announcers.

1983 - Summerall took over the 18th hole tower role as Scully had moved to NBC. Verne Lundquist made his debut on the Masters. So did Brent Musburger who was stationed in Butler Cabin for the first of 6 consecutive years. CBS increased the Saturday coverage to 2.5 hours and Sunday to 3 hours. Due to rain, the tournament did not finish on Sunday, so CBS added late afternoon Monday coverage.

1988 - CBS shifted the Sunday TV window to end at 7 pm ET where it remains to this day.

1990 - Bill Macatee hosted the USA coverage and would do so for all subsequent years that USA had the TV rights.

1994 - McCord made the infamous on-air "bikini wax" reference while describing the speed of the Augusta greens and remarked that mounds behind the 17th green resembled "body bags". These comments did not go over well with Augusta officials and despite still being a member of the CBS golf team, McCord has not worked the Masters since. That was also the last Masters tournament (and final CBS assignment of any kind) for Summerall who moved to Fox.

1995 - USA expanded the Thursday/Friday coverage to 2.5 hours each day. Nantz took over the lead announcer role.

1996 - Chirkinian produced the CBS telecast for the final time.

1997 - David Feherty called his first Masters on CBS as did Peter Oosterhuis.

2000 - Dick Enberg started a 7-year run of hosting the Masters from Butler Cabin. The Masters was televised live in HDTV for the first time.

2002 - Another major milestone took place this year as CBS increased the Sunday coverage to 4.5 hours and showed the leaders for all 18 holes. CBS had wanted to do this for a number of years, but tournament officials had always denied these requests in the past. This was also the last Masters in the TV booth for longtime lead analyst Ken Venturi.

2003 - Lanny Wadkins became the lead analyst and CBS expanded the Saturday coverage to 3.5 hours ending at 7 pm ET. The SD and HD productions of the event were unified. In the wake of the controversy over the Martha Burk protest regarding Augusta membership practices, the Masters chose to drop its sponsors. Both CBS and USA televised the event commercial-free. The same was true in 2004.

2006 - CBS added a one-hour special Jim Nantz Remembers Augusta which led into the Sunday coverage. That show looked back on the 1986 Masters using original CBS footage. This series has become an annual Masters Sunday tradition featuring vintage CBS telecast clips being rebroadcast for the first time.

2008 - ESPN took over the Thursday/Friday coverage with Mike Tirico anchoring the action.

2011 - ESPN expanded the Thursday/Friday coverage to 4.5 hours each day.

2013 - CBS increased the Saturday coverage to 4 hours. For both of the weekend rounds, CBS Sports Network aired a same-day prime time replay of the CBS network coverage.

2017 - Scott Van Pelt took over as the anchor for the ESPN coverage.

2019 - Due to a forecast for late afternoon storms, the Masters moved the Sunday tee times to the morning and sent the players out in threesomes. CBS televised the final round live starting at 9 am ET and re-aired much of that coverage at 3 pm.


Total scheduled live TV time for the Masters by year

I highly recommend the recent ESPN 30-for-30 digital short Silver Reunion which includes all 12 members of the 1972 USA Olympic Basketball team. The episode focuses on the continuing refusal by the players to accept silver medals after the controversial conclusion to the gold medal game. Unfortunately, this otherwise excellent documentary contains an inaccuracy.

At the 2:02 mark, the film displays a graphic which incorrectly states that the 1972 Olympic basketball games were played without a shot clock. Right after this, Doug Collins comments on the late game situation and perpetuates this myth which he has repeatedly done over the years.

The Olympics have always been played under international (FIBA) rules. FIBA introduced a 30-second shot clock in 1956 and that rule was indeed in effect for the 1972 games. The reason the USSR didn't try to run out the clock entirely on that possession was to avoid a shot clock violation. The 30-second clock also explains why the USA didn't attempt to foul a Soviet player as time was running out.

In September, Ken Pomeroy wrote an intriguing retrospective on 40th anniversary of this game where he also pointed out the shot clock rule, the faulty memory of Collins, and the staggering fact that announcers Frank Gifford and Bill Russell never once mentioned the shot clock during the entire ABC telecast. Perhaps that omission contributes as much to this longstanding myth as anything.