It seems unthinkable now, but from 1979-1981, CBS actually televised 9 of the 17 NBA Finals games in the 11:30 pm ET timeslot with 6 of those games airing on tape delay. For the surrounding years, CBS made frequent use of late night telecasts during the playoffs. And even for these late night games which CBS televised live in the east, most CBS affiliates in the west aired these games on tape delay at 11:30 pm PT.

Here is a closer look at this low point in NBA television history.

For the first 3 seasons of its TV contract with the NBA, CBS televised all weeknight Finals games in prime time and aired some earlier round games in prime time as well. But starting in 1977, with NBA ratings on the decline, CBS moved all of its weeknight pre-Finals telecasts to 11:30 pm ET. CBS aired these live which of course meant these telecasts only involved teams from the Western Conference. Most of these late night games were on Fridays.

In 1979, CBS continued to use the late night timeslot for live playoff games. But the network provided a real slap in the face to NBA fans by televising Sonics-Bullets Finals game 2 from Landover on a 3-hour tape delay at 11:30 pm ET. So the first-ever CBS tape delay playoff telecast was a Finals game. CBS televised game 4 from Seattle live in the east at 11:30 pm ET, but on tape delay in much of the west.

The 1980 Lakers-76ers Finals featured popular teams and top stars (Julius Erving, Kareem Abdul-Jabbar, and Magic Johnson). Yet CBS aired games 2 and 5 from Los Angeles live in the east at 11:30 pm ET, but again on tape delay in most of the west. And infamously, CBS televised the deciding game 6 on a 2.5 hour tape delay.

The worst season for tape delays was 1981. That year, CBS again intended to show many live late night games from the west coast. However, the Lakers and Trail Blazers were upset in the mini-series and the top-seeded Suns were eliminated in the next round. During the 1981 playoffs, CBS televised a whopping 17 games at 11:30 pm ET, but due to the lack of west coast game site, only three of these games aired live. On 4/29, CBS actually provided regional coverage of two games on tape delay (the first and last time they would do this). The Celtics-Rockets Finals featured 4 games on tape delay including the clinching contest for the second straight year. CBS aired games 1 and 2 on a 4-hour delay.

During the tape delayed telecasts, CBS would periodically stick a Recorded Earlier graphic on the screen. In some cases, the CBS affiliate in one or both of the participating markets would televise the game live. 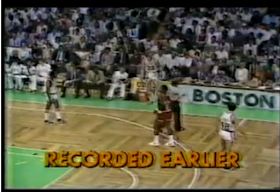 
In 1982, the NBA shifted the season a few weeks later to move the Finals away from the May TV sweeps period and CBS resumed showing Finals games live in prime time. However, CBS continued showing many earlier round NBA playoff games at 11:30 pm ET. The last tape delay telecast occurred during the 1986 conference finals. In 1987, CBS aired game 6 of the Eastern Conference finals in prime time which marked the first non-Finals prime time NBA playoffs telecast on CBS since 1976. The last time CBS used the 11:30 pm timeslot was in 1988.

Lowlights from the tape delay era