I recently discovered the fascinating Replacement Players podcast series. This series has a rather intriguing concept - select an older sports telecast as the main topic and use it as a springboard for discussion.

On the podcast, host Matthew Callan interviews a special guest after each has watched a recording of the classic telecast. The conversation covers interesting details about the game itself, but also delves into a wide range of areas including commentary on the announcers, graphics, and original commercials. Callan and his guests do a skillful job of supplying background details surrounding the game at hand and conveying the sports TV landscape of that time.

The first episode focuses on the so-called "Rick Camp game" (Mets-Braves) from July 1985. I remember watching some of the early innings of this game on WOR-9, heading out somewhere, driving home late, learning from the car radio that the game was still going on, and then staying up until around 4 AM to watch the remainder. The podcast recaptures the wackiness of that night and reminded me of many specifics I had forgotten.

Episode 2 covers the "Mark Fidrych game" which of course is the famous ABC Monday Night Baseball telecast (Yankees-Tigers) from June 1976 which has also been replayed on MLB Network. The topic for episode 4 is the "Pedro Martinez game" from the 1999 ALDS (Red Sox-Indians).

While the series has dealt mostly with baseball telecasts, episode 7 branches into college basketball and looks at the 1992 Duke-Kentucky NCAA tournament regional final (a.k.a. the "Christian Laettner game"). Check out the complete episode listing.

Replacement Players uses the classic Jet Set instrumental music to provide an ideal lead-in to the baseball episodes. You may recall this as the theme song from the syndicated TV series This Week in Baseball.

I highly recommend this free and entertaining podcast series. If you saw the original telecast in question, it will bring back tremendous memories. And even if you didn't see the original, the podcast episode will provide some valuable historical perspective.
Jeff Haggar at 5:41 PM No comments:
Share

The US Open has the longest TV history of any of the golf majors. It stands unique as the only major which still conducts an 18-hole playoff.

The TV coverage of the US Open continues to dwarf that of the Masters. Here is a summary of my research on how the coverage of our national championship has evolved since 1954. All listings of hours refer to scheduled TV coverage.


Chronology of US Open TV coverage

1954 - The US Open was televised nationally for the first time as NBC provided 2 hours of Saturday coverage anchored by Lindsey Nelson. At the time, the tournament was a 3-day event concluding with 36 holes on Saturday.

1955 - NBC provided only one hour of coverage this year and ended its Saturday telecast with analyst Gene Sarazen congratulating Ben Hogan on his "victory" while some golfers were still on the course. But after NBC signed off, Jack Fleck produced two late birdies to tie Hogan. Fleck won the 18-hole playoff the next day, but NBC elected not to televise any portion of the playoff.

1959 - NBC included entertainer Ed Sullivan on the broadcast crew for this telecast. Sullivan was a member at Winged Foot which hosted the tournament that year. The other members of the NBC team were Chick Hearn, Ray Scott, and Bud Palmer, all of whom worked multiple US Opens during this era.

1965 - The US Open changed to the modern 4-day format with a Sunday finish and NBC provided coverage on both weekend days. NBC also added an hour of coverage for the Monday playoff. NBC televised the 1965 tournament in color which was the first color telecast of any golf major. 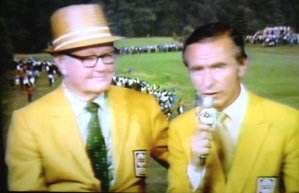 1970 - Dave Marr joined the ABC team and called the first of 22 consecutive US Opens for the network.

1973 - ABC used retired LPGA pro Marilynn Smith as a commentator where she worked alongside Gifford. This marked the first time a female had ever served as an announcer on a men's golf telecast. By this time, ABC had cameras to cover the final 13 holes.

1974 - Marr took over as lead analyst and would remain in that role through the 1991 tournament. ABC also used Tony Jacklin as an analyst after he missed the cut.

1975 - McKay took over as lead announcer. ABC also added Peter Alliss to the booth and Bob Rosburg as an on-course reporter. For the first time, ABC used handheld cameras in the fairways. ABC carried 1.5 hours of coverage of the Monday playoff.

1977 - This year saw a milestone event in golf TV history as ABC televised 4 hours on Sunday and covered the leaders for all 18 holes. This was the first time a network had ever provided 18-hole coverage for any round of a golf tournament. ABC used 30 cameras and claimed that this was twice as many as CBS used for the Masters.

1978 - ABC expanded to also televise 4 hours on Saturday for a total of 8 hours.

1982 - ESPN provided 3 hours of coverage each day of the Thursday and Friday rounds. This represented the first cable coverage of the US Open. Jim Simpson (who had worked some of the early US Opens for NBC) anchored the ESPN coverage with Cary Middlecoff, Lou Palmer, and Jim Thacker  forming the rest of its broadcast team. ESPN has covered the first 2 rounds of the US Open ever since. ABC added Jack Whitaker to its crew. During much of the 1980s, ABC would rotate anchors among McKay, Whitaker, and Alliss during each telecast with each calling the action from a monitor.

1983 - Due to rain, the final round did not conclude on Sunday. ABC added coverage of the Monday finish, but did so on tape delay.

1986 - Chris Berman hosted the ESPN coverage for the first time and has remained in that role ever since. ABC added Jack Nicklaus as a special commentator and he remained in this role through 1994. Nicklaus was still an active player and would join the weekend telecasts in progress in years when he made the cut.

1990 - Roger Twibell took over as the main ABC anchor. ABC added 1.5 hours of joined-in-progress coverage of the Monday playoff and did the same in 1991.

1992 - Brent Musburger became the main ABC anchor and he remained in this role until ABC lost the TV rights after the 1994 Open.

1993 - ABC used Peter Jacobsen as lead analyst. This was also the final year that McKay called the US Open.

1994 - ABC televised the last of its 29 consecutive US Opens. This was the first year that there was TV coverage of the entire Monday 18-hole playoff as ESPN covered the first 2.5 hours and ABC picked up the rest.

1995 - NBC took over the USGA TV contract and installed Dick Enberg and Johnny Miller in the 18th hole tower. NBC expanded the weekend coverage to 6 hours each day and combined with ESPN to show a total of 25 hours. NBC also added former ABC analyst Marr to its crew and used him through 1997. Other members of that NBC US Open crew included Dan Hicks, Bob Trumpy, Roger Maltbie, John Schroeder, and Dan Pohl. Miller, Hicks, and Maltbie remain to this day.

1996 - NBC added 2 hours of coverage on Thursday and Friday from 3-5pm ET (while ESPN provided coverage both before and after the NBC window). NBC became the first network to carry portions of all 4 rounds of a golf major. NBC has continued this practice in the identical time slot ever since. Gary Koch joined the NBC team.

2000 - Hicks took over as lead announcer for NBC. Mike Tirico called his first US Open for ESPN.

2003 - Bob Costas worked the tournament in a host role for NBC for the first time. 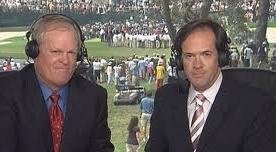 2006 - Both ESPN and NBC broadcast the US Open in HDTV for the first time.

2008 - With the tournament being held at a west coast site, NBC shifted its weekend coverage into the prime time hours. The network would do the same in 2010 and 2012.

2009 - With the tournament impacted by rain, NBC added morning hours on both weekend days. The fourth round concluded on Monday and ESPN came on the air that morning at 9 am ET while NBC picked things up at 11:30 am ET.

2013 - NBC and ESPN plan an unprecedented total of 35 hours of combined live coverage. NBC did a whopping 7.5 hours each weekend day.

2014 - The 20-year run of NBC and the ESPN streak of 33 consecutive years both came to an end after Fox acquired rights to the event starting in 2015. One of the ESPN hours shifted to ESPN2 due to World Cup Soccer coverage.

2015 - Fox carried its first golf major and combined with FS1 to televise a record 38.5 hours. Fox aired prime time coverage during all four rounds. Joe Buck served as the lead announcer with Greg Norman in the #1 analyst position.

2019 - On Thursday, in parallel to the regular Fox prime time coverage, FS1 carried three hours of featured group coverage. Fox and FS1 combined for a record 40 hours of scheduled coverage (not counting the parallel hours on Thursday night).

Total scheduled live TV time for the US Open by year

Note: I am not including added coverage (such as playoffs) in these numbers, but I did mention these cases in the above chronology.