The classic TV series The Odd Couple is one of my favorite comedies. ABC televised it from September 1970 through March 1975. The network continually bounced the sitcom between Thursday and Friday nights using different time slots. The show received mediocre ratings during its original run of 114 episodes, but achieved much greater success during syndication. 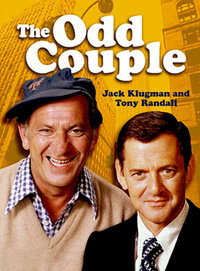 The Odd Couple was set in New York City and starred Tony Randall as Felix Unger and Jack Klugman as Oscar Madison. Randall played a commercial photographer while Klugman portrayed a sports columnist for the fictional New York Herald newspaper. The TV show was based on a 1965 Broadway play of the same name written by Neil Simon. The initial season used a laugh track, but for subsequent seasons, the show was filmed before a live studio audience in Hollywood.

The two central characters were both divorced and shared a Manhattan apartment. Felix was quite meticulous, obsessed with cleanliness, and prone to sinus attacks. Oscar was rather sloppy and disheveled and would often wear a Mets hat backwards. Felix loved the opera while Oscar frequently gambled and smoked cigars. Randall and Klugman played their respective roles brilliantly. The duo had tremendous on-screen chemistry and the contrast between the opposite personalities of the characters worked perfectly. The episodes often featured sequences of rapid-fire dialogue filled with humorous one-liners. The banter between Felix and Oscar defined the show.

During some of the early seasons, the show used a variation of the following opening theme narration which ended with the classic question: "Can two divorced men share an apartment without driving each other crazy?"

Garry Marshall produced the TV series. The cast included two prominent supporting characters. One was Murray Greshler played by Al Molinaro. Murray was a policeman who was a regular in Felix and Oscar's poker game. The other was Myrna Turner played by Garry's sister Penny Marshall. Myrna was Oscar's secretary at the newspaper. Both Penny and Al would later surface on the sitcom Happy Days which Garry would also produce.

The Odd Couple utilized guest stars on several episodes. One of the most notable of these was Howard Cosell who was the most recognized sports announcer at the time. His Q score and notoriety were exploding as Monday Night Football on ABC grew in popularity. He also called many boxing matches and did segments for Wide World of Sports. 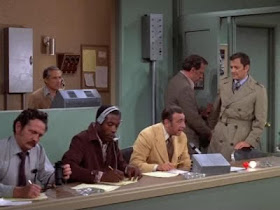 In a bit of ABC cross-promotion, Cosell made two appearances on the sitcom, both times portraying himself. As an aside, is there any TV personality in history more suited to playing himself/herself than Cosell? I would think not.

His first appearance came in a 1972 episode appropriately titled Big Mouth. In this show, Felix has landed a photography job for a cola advertisement spot featuring Cosell. The script contains several verbal clashes between Cosell and Oscar which played on the real-life disdain that Cosell and the New York Daily News sportswriter Dick Young demonstrated toward each other at that time.

The first part of the episode illustrates a typical exchange between Felix and Oscar. I especially like the way Felix exclaims "You took a cab to come here to borrow money?" As soon as Cosell enters, he and Oscar immediately start trading insults. Next, we have a super scene where Felix is ranting at Oscar who is at the typewriter working on a column which blasts Cosell. And note the way he "files" the article with Myrna.

The next clip includes a memorable "handshake" between Oscar and Cosell. Then there is the classic sinus and nasal twang routine resulting in Cosell calling Felix an "inane drone". Later, the script calls for Cosell to show off by rapidly rattling off the entire Colts defensive lineup from memory.

The final segment begins with Oscar learning that despite his request to pull the column, Myrna convinced the editor to run it. During the photo shoot, Cosell sees the article and storms out of the studio. In a broadcast scene, Cosell introduces Charlie - winner of the (classically titled) "Why I Want to Be Like Howard Cosell" contest. Cosell then tries to embarrass Oscar by putting him live on the air without warning. Oscar remains silent, overcome with stagefright, but Felix takes the microphone and jumps in with some elegant and longwinded play-by-play to bail out his best friend.

One more point of interest - According to a book by Mark Ribowsky, the lengthy departing remark from 8:09-8:36 mark on this clip was actually written by Cosell.

Cosell made a return appearance on The Odd Couple in the 1975 episode Your Mother Wears Army Boots. ABC executive producer Roone Arledge also played himself in that show as did opera singer Martina Arroyo. That episode also used the Monday Night Football angle with ABC hiring Oscar as a temporary fill-in for Alex Karras in the booth.

For a "non-actor", I feel that Cosell demonstrated rather impressive acting skills on these shows and added greatly to the entertainment. He sounded authentic with his distinctive and deliberate vocal pattern. The writers gave him many great lines, but Cosell was willing to play a caricature of himself and was quite successful in doing so. At various points in the 1972 show, Cosell describes himself as "the big man", "the great one", "the gifted one", "the single most identifiable voice in all broadcasting", and refers to "my own special talents". In the 1975 episode, he brazenly refers to Monday Night Football as "my show".

The production was surprisingly shoddy regarding the football games Cosell was broadcasting. The 1972 episode covers two Giants games and both times the displayed footage contains artificial turf. The show implies that the first game was in New York and specifically describes the second game as being at Yankee Stadium, but it had natural grass. The Giants didn't play home games on artificial turf until 1976. Charlie calls a play as ending at the 49-yard line, but the footage shows a tackle around the 30-yard line. On the play Felix calls, he describes Roger Staubach being stopped for no gain, but the footage shows Duane Thomas being tackled. In the 1975 episode, Cosell describes a 19-yard pass by Joe Namath, but the footage shows the play covering only 11 yards. Finally, both episodes portray Cosell as an NFL play-by-play announcer rather than the unique "third man in the booth" role he actually filled on the ABC games.

Randall and Klugman each had long and successful acting careers, but both were best known for their roles on The Odd Couple as evidenced by virtually any obituary or tribute written for either one. Klugman won the Emmy Award for Outstanding Lead Actor in a Comedy Series in both 1971 and 1973 for his role as Oscar while Randall took the same honor in 1975 for his role as Felix. During the entire 5-season run of the series, both Randall and Klugman were among the handful of nominees for this award every year.

In addition to the Me-TV network, The Odd Couple is also currently available on the Cloo TV network and many clips from the series appear on Youtube.

This post is part of Me-TV's Summer of Classic TV Blogathon hosted by the Classic TV Blog Association. Go to http://classic-tv-blog-assoc.blogspot.com/ to view more posts in this blogathon. You can also go to http://metvnetwork.com/ to learn more about Me-TV and view its summer line-up of classic TV shows.
Jeff Haggar at 7:09 AM
Share