The PGA Championship made its debut on national TV in 1958. That year, the tournament shifted from a match play competition to the current (and more suitable to TV executives) 72-hole stroke play event.

Here is a summary of my research on how the coverage of this major championship event has evolved since then. All listings of hours refer to scheduled live TV coverage.

1958 - The PGA Championship was televised for the first time as CBS provided a total of 2.5 hours on the weekend with Jim McKay and John Derr on the call. CBS covered holes 15-18.

1961 - Chris Schenkel became the lead announcer on CBS after McKay left the network. The tournament required an 18-hole playoff on Monday, and CBS added an hour of joined-in-progress coverage of that.

1965 - The tournament moved to ABC where it would remain for 26 years. Schenkel, who had recently moved to ABC retained the primary announcer role. Bryon Nelson began a run as lead analyst. McKay was also part of the ABC crew. ABC upped the coverage to 3.5 hours.

1966 - The PGA Championship was televised in color for the first time.

1971 - The PGA Championship was moved to February, but starting the following year has been played in August ever since. Up through 1968 the event was often held in July, sometimes taking place just one week after the British Open.

1974 - Marr became the lead analyst and would retain this role until ABC lost the network TV rights.

1976 - McKay took over as lead announcer. The tournament was delayed by rain and finished on Monday. ABC added 2 hours of coverage that afternoon.

1982 - ESPN provided the first cable coverage of the tournament with 3 hours on both Thursday and Friday. ABC expanded to 3 hours per day on the weekend.

1984 - There was no cable coverage of the first two rounds. 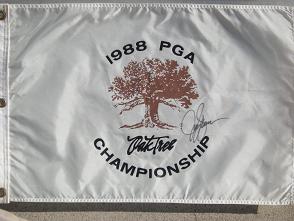 1986 - Jim Simpson and Bruce Devlin anchored the ESPN coverage which  increased to 4 hours each weekday. ABC added 2.5 hours of joined-in-progress coverage on Monday to show the conclusion of the tournament which had been delayed by rain. ABC added Jack Nicklaus to its commentary team.

1987 - Roger Twibell took over as lead voice on the ESPN telecasts.

1988 - ABC expanded to 4 hours on each weekend day, providing full 18-hole coverage of the leaders for the first time. McKay sat out the event so Jack Whitaker served as lead announcer for ABC. McKay would return to this role in 1989.

1991 - The TV coverage underwent massive changes. TBS took over the cable package and increased the weekday coverage to 6 hours per day. TBS also added 2 hours of Saturday and Sunday coverage. Bob Neal and Bobby Clampett anchored the TBS coverage. TBS also used golf instructor David Leadbetter,  former LPGA player Donna Caponi, and NFL analyst Pat Haden. CBS acquired the network rights and provided 4.5 hours each on Saturday and Sunday with Pat Summerall and Ken Venturi working the 18th tower. Jim Nantz and Gary McCord were part of the CBS crew and have worked every PGA Championship since. Other members of the CBS team were Ben Wright and Steve Melnyk.

1994 - Nantz took over the lead spot on CBS for the first time on a golf major.

1995 - Ernie Johnson became the primary anchor on TBS with Marr as lead analyst. CBS used former LPGA player Mary Bryan on its telecast. Some media reports at the time claimed that this was the first time a female worked a men's golf major, but ABC used Marilynn Smith on the 1973 US Open.

1999 - Turner Sports moved the cable coverage to TNT where it has remained ever since. Johnson and Clampett remained as the primary announcers.

2004 - CBS and TNT televised the PGA Championship in HDTV for the first time.

2005 - CBS added coverage starting at 10am ET of the Monday finish which was necessitated by rain on Sunday.

2006 - Verne Lundquist filled in on TNT for Johnson who was undergoing chemotherapy.

2011 - Lundquist stepped in for Johnson on the TNT Sunday telecast after Ernie's father passed away.

2012 - TNT added coverage starting at 8am ET on Sunday to cover the end of round 3 after inclement weather stopped play on Saturday.

2016 - The PGA Championship moved to late July because golf was added to the Olympic Games. TNT added two bonus hours on Sunday to cover the weather-delayed conclusion of round 3.

Note: I am not including added coverage (such as 18-hole playoffs) in these numbers, but I did mention these cases in the above chronology.