The typical timeslots for national sports telecasts on the major over-the-air networks are weekends, holidays, and prime time. It is relatively rare for TV networks to show daytime sports programming on weekdays when a sizable portion of the potential audience is at work or in school. But this does occur on occasion and here is a sport-by-sport historical summary of my research of such telecasts.

For the purposes of this post, I am only considering telecasts on the major networks (CBS, NBC, ABC, and Fox) and I am excluding major holidays.

From 1949-1966, every MLB All-Star game was televised on a weekday afternoon. The same was true of the 1969 game which was rescheduled on a Wednesday afternoon following a rainout the previous night.

From 1991 to the present, CBS has presented afternoon coverage of the opening Thursday and Friday of the NCAA Tournament.

Starting with 1973, the major networks have provided one or more afternoon telecasts annually on "Black Friday" - the day after Thanksgiving. Also, during the bowl season, networks have often televised weekday afternoon games on dates such as Dec 31 and Jan 2.

For many years, the NFL avoided playing any games on Christmas Day. When the holiday fell on a Sunday, this policy resulted in Monday afternoon Dec 26 telecasts of the NFL Championship game on NBC in both 1955 and 1960. In 1977, CBS televised a divisional playoff doubleheader on Monday Dec 26. CBS also aired a wild-card playoff game on Monday Dec 26 in both 1983 and 1988.

Going back to 1996, NBC has annually televised 2 hours in the late afternoon of the Thursday and Friday rounds of the US Open.

CBS provided Friday afternoon coverage of the Masters in 1956 and 1957.

Major networks added Monday afternoon coverage of 18-hole playoffs for:
and of Monday finishes due to rain for:
Tennis

For several years, CBS has televised Friday afternoon action during the second week of the US Open. Since 2008, CBS has also provided a late afternoon telecast of the men's finals on Monday. From 2008-2011, rain necessitated the Monday finish. Since 2012, the tournament has been scheduled to conclude on Monday.

Similarly, NBC has carried daytime weekday coverage for many years during the second week of the French Open tournament although much of that action has been on tape delay. NBC did the same for Wimbledon when it held the network TV rights.

The 1997 Indianapolis 500 was postponed by rain on Sunday and suspended after 15 laps on Monday (Memorial Day). It was resumed on Tuesday May 27 and ABC provided a daytime telecast of the race.

Note: The 2012 Daytona 500 was postponed by rain on Sunday and Fox had planned to televised the rescheduled event on Monday Feb 27 at noon. However, additional rain caused the race to be pushed back to Monday night so the Fox telecast wound up in prime time. 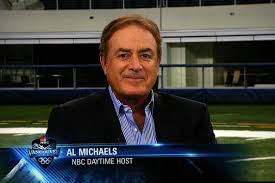 The major networks holding the rights have made a habit of devoting many daytime weekday hours to both the Summer and Winter Olympic games.

Several of these examples involve special circumstances such as rain postponements, tie-breakers, or events taking place on the day before/after a major holiday. The yearly staples which still wind up on "regular" daytime weekday TV are: