A look back at the 1964 Clay-Liston closed-circuit telecast

Theater Network Television, Inc (TNT). produced the closed-circuit telecast of this fight and carried it live at 10 pm ET on a Tuesday night. The announcers on that telecast were Steve Ellis and former heavyweight champion Joe Louis. The production was shown in over 350 theaters and arenas throughout North America. TNT also made the telecast available via satellite to Europe on a tape delay of a few hours.

ESPN Classic will replay this telecast on Tuesday 2/25 at 7 pm ET (with three repeat showings at two-hour intervals).

Per newspaper reports from 1964, tickets for that theater telecast ranged from $4 to $10 (compared to $20-$250 for those who attended the fight in Miami). More than 1.1 million theater seats were available across the USA. Many of the locations were movie theaters including some drive-ins. The telecast was also offered in some large capacity stadiums such as the Los Angeles Sports Arena and Cobo Hall in Detroit. And some community pay-TV networks provided an in-home feed for $3.

Theaters had to agree to provide non-racially segregated seating in order to stage the telecast. Some theaters in the south refused to agree with that contract provision and therefore could not show the event.

This clip begins with the weigh-in and then contains the original TNT telecast of the fight starting around the 2:22 mark.

The telecast seems rather primitive even by 1970s standards, but it is great that such original boxing TV footage exists from a time period where relatively little survived from the major team sports. The production contained multiple awkward sequences. In round 3 after a flurry from Clay (around the 20:25 mark), you can hear a few bizarre incomplete statements from Ellis and then about 20 seconds of "dead air" before he resumes the blow-by-blow. As round 7 is about to begin around the 36:10 mark, Ellis exclaims "They might be stopping it!" and tells Louis to go up to the ring. But then the telecast leaves viewers hanging with almost 90 seconds of images with no announcer audio before we finally see Ellis and Louis together in the ring. Ironically, during this period of silence, you can see Cosell getting a radio interview with Clay before the TV crew is able to do so. During the chaotic post-flight scene, Ellis and Louis often spoke simultaneously. Whenever Louis appeared on-screen, he seemed to go out of his way to avoid looking at the camera.

Here are some clips which include portions of the original radio broadcast. This one covers the first round with Keiter calling the action.

And here is the finale with the radio audio starting at 0:48 on the clip. Once the match ended, the radio broadcast seemed to upstage the TV production as Cosell definitively told listeners about the match result, and then landed interviews with both fighters while TNT never aired any words from Liston. You can also see how quickly Cosell was able to get into position to talk to the new champion while TNT fumbled around.

Joe Buck and Tim McCarver worked together from 1996-2013 in the Fox baseball TV booth. How does their on-air partnership of 18 years stack up historically against other network TV announcer duos? Which national broadcast pairings have remained intact the longest in various sports? Which tandems hold the longest active streaks? To follow up on my look last year at consecutive season streaks by network TV broadcasters, here is a summary of my research on similar streaks by pairs of announcers.

A few groundrules:
Among the sports I researched, the record holders are Mike Patrick and Dick Vitale with a run of 23 consecutive seasons on college basketball. The legendary team of Pat Summerall and John Madden come in second with a streak of 21 years on the NFL. Overall, I found only six streaks longer than 15 seasons.

Here is the breakdown by sport: 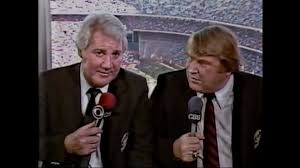 Summerall and Madden have the longest NFL streak (a run that spanned a move from CBS to Fox). The tandem of Dick Enberg and Merlin Olsen holds second place for now. Kenny Albert and Daryl Johnston have the longest active streak. (Note: Since I am only counting only booth announcers, I am treating this team as a duo rather than a trio because Tony Siragusa serves as a sideline analyst.) Charlie Jones and George Ratterman started their streak on the AFL.

College basketball tends to have the longest streaks. Patrick and Vitale teamed up for many ACC games on ESPN over their 23-season run. Jim Nantz and Billy Packer check in at 18 seasons, all of which concluded with the Final Four. Longtime NCAA Tournament partners Ian Eagle and Jim Spanarkel have the longest active streak with the team of Verne Lundquist and Bill Raftery right behind. Vitale has worked regularly with several play-by-play announcers over the years and appears four times on this list. With Nantz working a limited regular season schedule for many years, CBS often paired Lundquist with Packer and that duo cracks this list with 10 straight seasons. Ron Franklin and Mike Gottfried were fixtures in the ESPN Saturday night TV booth for 14 straight seasons. They top the tandem of Keith Jackson and Bob Griese by a single season. If we have indeed seen the last of the Brent Musburger pairing with Kirk Herbstreit, then the team of Verne Lundquist and Gary Danielson should take sole possession of the longest active streak when the upcoming season starts. Jackson and Musburger each appear three times on this list.

I only found two MLB streaks of at least 10 years, but they were among the longest overall. The ESPN Sunday night duo of Jon Miller and Joe Morgan holds the top spot, nosing out Buck and McCarver by one season. With McCarver retiring from Fox, the team of Kenny Albert and Eric Karros will inherit the longest active streak. Tony Kubek appears three times on this list. Joe Garagiola appears on the list in both the play-by-play and analyst roles.

The NBA produces much shorter streaks than the other sports as many analysts bounce back and forth between the TV booth and coaching jobs. Despite never being the #1 team on ABC/ESPN, Mike Tirico and Hubie Brown hold the NBA record at 8 seasons which is also the longest active mark. Turner Sports mixed and matched Brown and Doug Collins with several play-by-play announcers in the early 1990s which explains the overlapping streaks featuring those analysts. Overall, Collins appears four times on this list and Brown shows up three times.