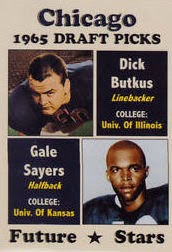 One of the best aspects of NFL Network is its focus on documentaries. Last year, the network launched a fascinating series Caught in the Draft which spotlighted the 1964 draft on the 50th anniversary and followed up with episodes covering the 1974, 1984, 1994, and 2004 drafts. This week marks the return of that concept as NFLN will profile the drafts for each year ending in "5" from 1965-2005.

The new season debuts on Thursday April 2 at 9 pm ET with an episode on the 1965 draft and the intriguing battle between the NFL and AFL for new talent. The series continues with new episodes in that same timeslot for five consecutive weeks with several replays scheduled. Leading into the season premiere, NFLN will re-air the 1964 episode on 4/2 at 8 pm ET and that pattern will continue each week which is great news for anyone who missed any of the showings from last year.

This promises to be another excellent series produced by NFL Films. Check out the trailer for the 1965 episode.