On Wednesday night, ESPN aired footage from the famous Texas Western victory over Kentucky in the 1966 NCAA championship game. The black & white video was shot from a wider view than a conventional telecast, but it still provided a fascinating glimpse into this historic game which grew in significance over the years. 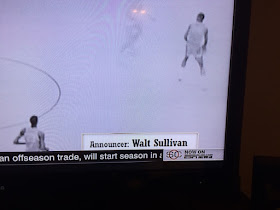 The ESPN telecast supplemented the footage with audio from the Kentucky radio broadcast. Embarrassingly, ESPN misidentified the announcer as "Walt" Sullivan both in a promotional press release and in an on-screen graphic.

The voice was actually that of longtime Kentucky radio announcer Claude Sullivan. Many other sites propagated this ESPN error without performing any fact checking. (Note: Sometime after the airing, ESPN updated its press release to reflect the correct name of the announcer.)

Sullivan never mentioned race during his game commentary. On multiple occasions, Sullivan misidentified (or failed to identify) Texas Western players, especially early in the game. He seemed to focus more on what he viewed as the "poor" play of the Wildcats rather than praise the Miners. The game action was interesting as there were several travelling violations called (which Sullivan referred to as "walking"). It also provided a reminder that this era featured the one-shot non-shooting foul.

The footage appeared to be from a coaching film. It certainly wasn't from the original telecast as it contained no graphics. ESPN added some supplemental graphics to periodically display the score. Of course, ESPN had previously stated that it was re-airing the original telecast only to later back down from that claim.

ESPN2 will re-air this special on Sunday 4/3 at 11am ET. I assume the ESPN production crew will edit the above graphic by then.
Jeff Haggar at 9:11 PM
Share