The unique Al McGuire - from TV sidekick to star

The TV career of Al McGuire got its start on an event he wasn't even broadcasting. During the final seconds of the 1977 NCAA Tournament championship game with the outcome no longer in doubt, the NBC cameras zoomed in on the Marquette head coach. Earlier, McGuire had announced he would retire from coaching after the season at the relatively young age of 48. Curt Gowdy describes the scene as McGuire, on the verge of an unexpected championship, is overcome by emotion.

In rewatching this clip, I was struck by two things: 1) how McGuire (unintentionally) dominated the end of the telecast and 2) the prophetic quote from Gowdy at the 17:46 mark accompanied by a prophetic split screen image with a circle around McGuire (more on that later):


And McGuire who says: "I'm an entertainer. I entertain the fans."

and then this starting at 18:25 from Dick Enberg:

In fact, the college basketball TV entertainment factor was about to be ratcheted up several notches. The goodbye would be brief and even greater moments were on the horizon. 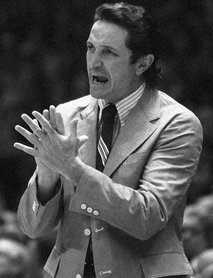 When McGuire retired from coaching, college basketball was a essentially a regional TV sport with just one national telecast per week. Just two seasons earlier, NBC had added the first regular season national network TV package with Enberg and Billy Packer as the announcers.

For the 1977-78 season, NBC hired McGuire who was a novice to television and added him to the mix. However, rather than place him courtside with Enberg and Packer, NBC initially stationed McGuire next to a monitor away from the court and only cut to him periodically during the telecasts (starting him off as the ultimate sidekick!). And NBC would place his image on a small corner of a split screen during his in-game commentary. After a few weeks of this awkward arrangement, Enberg and Packer convinced NBC to move McGuire alongside them to form a true 3-man broadcasting team.

Nothing about Al McGuire was scripted. Rather than attempt to fill the role of a traditional basketball analyst, McGuire simply "played" himself on the air. And, just as importantly, NBC allowed the true personality of McGuire to shine instead of trying to make him conform to a more conventional style.

He spoke sparingly at the beginning and his vocal delivery wasn't always smooth. But he had a feel for basketball and he eventually developed a feel for broadcasting. He described things in simple terms and offered opinions on in-game coaching decisions he would make. His unassuming style began to resonate with fans.

When he was a head coach, McGuire didn't watch film of opponents and left the strategic advance planning to his assistants. He made his imprint during games when he reacted to the situation at hand and made the appropriate adjustments. As a broadcaster, he took a similar approach. He didn't study rosters or statistics before telecasts. Instead he would ask a coach or scout to fill him in on a few key players for each team. When the TV lights came on, he would rely on his instincts for the game. He let the action on the court guide his commentary.

McGuire's distinctive voice, with his Brooklyn accent, just sounded so cool and drew me in. He brought a lot of colorful terminology to the airwaves: a tall player was an aircraft carrier, a down to the wire game was a white knuckler, a fancy move was French pastry, the lane area was the paint, and when a game was clinched, it was tap city. His style was enthusiastic and his commentary provided insight into his unusual coaching mindset.

As a coach, McGuire was unconventional to the core. In 1970, he turned down an NCAA Tournament bid and instead took Marquette to the NIT. (The NCAA no longer allows this.) He received two technical fouls in the 1974 NCAA championship game and blamed himself for costing his team a chance to win. He recruited many inner-city players from disadvantaged backgrounds. He implemented a "senior star" system in an attempt to get his veteran players noticed by professional scouts. He helped pioneer some stylish basketball uniform designs which were later banned by the NCAA.

Away from the arena, he loved to talk about motorcycles rather than basketball. Even though he earned decent money, he drew great pleasure from negotiating prices at flea markets. He was brilliant at reading people and relating to them. And he brought those traits into the broadcast booth.

A 3-man announcing team was very uncommon at the time, especially in the fast-paced game of basketball. But because co-analysts Packer and McGuire had such contrasting styles, it clicked. Enberg was emerging as one of the best play-by-play announcers ever. Packer followed the sport intensely (covering ACC games during the week) and focused on player matchups and strategy. McGuire added emotion and flair - the entertainment angle. The trio developed tremendous chemistry and meshed so well together. The resulting blend showcased the strengths of each.

Packer and McGuire frequently disagreed on the air which brought even more attention to the telecasts. The tandem would argue about everything from goaltending calls to coaching decisions to whether the undefeated Indiana State team deserved to be ranked #1 in 1979. Al would often playfully needle Packer about the ACC.

Because NBC generally covered just one national game a week, it was a huge event when the network came to town for a featured Sunday afternoon telecast. And McGuire, the former isolated sidekick, was quickly becoming the star of the show.

I recall tuning in and wondering what McGuire would say about Ralph Sampson or Bob Knight. Or what wacky predictions Al might make. When I played rec basketball in college, I remember McGuire's catch-phrases making their way into the action. When we watched the TV games, the banter between Packer and McGuire was a huge topic of conversation.

The Enberg/Packer/McGuire run lasted only four seasons. CBS acquired rights to the NCAA Tournament starting in 1982 and lured Packer away from NBC. McGuire continued to work regular season games with Enberg on NBC for several years before moving to CBS himself in 1992 and getting to call March Madness games again. After hiring Enberg in 2000, CBS did reunite the trio for one game that season. But McGuire only called two games after that and health issues forced him to miss the 2000 NCAA Tournament.

McGuire sadly passed away in 2001 from leukemia at age 72. But his legendary storytelling lives on, partly due to a one-man play written by Enberg titled McGuire and performed by actor Cotter Smith.

McGuire was elected to the Naismith Memorial Basketball Hall of Fame in 1992 as his charismatic TV color commentary supplemented his relatively short coaching career.

The following clip of McGuire on himself (at the 12:00 mark) captures the essence of McGuire:

For college basketball, Enberg is arguably the best play-by-play announcer of all time and Packer is arguably the best analyst ever. And yet they peaked during those four special seasons alongside McGuire when they formed my favorite all-time broadcasting team. Here is the classic trio on the call of a game from 1980:

College basketball on TV exploded in popularity starting in the late 1970s and I believe that McGuire was a key factor in that growth. By the late 1980s, the sport had national telecasts on all three major networks plus ESPN. But Enberg, Packer, and McGuire paved the way.

Al McGuire was indeed an entertainer and unique as a TV analyst. I thank him for all the great moments he provided.


This post is part of a TV Sidekick Blogathon hosted by Classic Film and TV Cafe. Please check out the complete schedule of blog posts for this event.