This week, ESPN college basketball analyst Dick Vitale is scheduled to call a game with Karl Ravech for the first time. Ravech will become the sixth play-by-play announcer this season to receive a first-ever TV pairing with Dickie V.

After noticing a recent flurry of such first-time pairings, I wondered how many different play-by-play partners have shared the broadcast table with Vitale over the years. So I attempted to compile a list of all play-by-play announcers who have worked with Vitale on college basketball. (Note: I am almost certainly missing some announcers from the early ESPN years as these the hardest to research.) 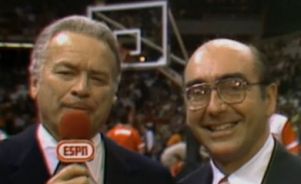 The list is a mix of prestigious broadcasters and lesser-known voices. One interesting name (perhaps surprising to some) is Al Michaels who worked a single time with Vitale (the 1989 Pac-10 championship game on ABC).

I find the pattern intriguing. Starting from the late 1980s, Vitale was acquiring about two new partners per year. Then after 1997, Vitale went without any new partners until 2005 and only picked up three additions to this list from through 2013. However, a few years ago, ESPN installed Jay Bilas as its top analyst to work with Shulman on the highest profile games. This move has resulted in Vitale working with a wide variety of first-time partners in recent seasons (10 since 2014).

Here is the list that my research uncovered (with calendar year of the first such telecast for which I found evidence). Again, note that I am very likely to be missing some names from the first decade.