If you are searching for a villain in the world of sports TV broadcasting, one figure jumps quickly to mind. That would be the man who wrote the following in his 1973 self-titled autobiography:


Arrogant, pompous, obnoxious, vain, cruel, verbose, a show-off. I have been called all of these. Of course, I am.

The writer was none other than Howard Cosell. 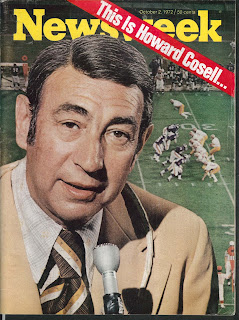 When ABC launched the Monday Night Football package in 1970, executive producer Roone Arledge unveiled a unique three-man booth. Arledge inserted Cosell into the mix to supplement the traditional roles of a play-by-announcer (Keith Jackson) and analyst (Don Meredith). And the pivotal member of that commentary team was clearly Cosell. 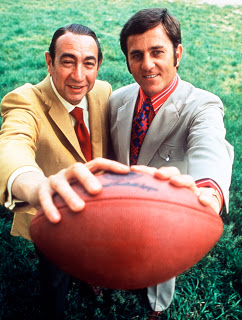 Meredith, who was new to broadcasting, was so apprehensive as the season opener approached that he considered backing out of his contract to call the games. Cosell told Meredith: “You'll wear the white hat, I'll wear the black hat.” By casting himself in such a role and exhibiting all of the characteristics he outlined in the above book quote, Cosell turned Meredith into a hero to viewers who loved the way that Dandy Don would needle Humble Howard. Ratings surged as fans were drawn to the weekly banter between Meredith and Cosell. Meredith even earned an Emmy Award from that first season.

After the first game, Cosell became a villain in the minds of advertisers, most notably Henry Ford II of the Ford Motor Company who felt that Cosell detracted from his enjoyment of the telecast. He threatened to withdraw the Ford sponsorship of the prime time series unless ABC removed Cosell from the booth. After early season ratings proved stronger than expected, Ford backed off from the threat and Cosell remained a prominent member of the ABC NFL package for its first 14 years.

A key feature of this prime-time series was the halftime highlights segment which was narrated by Cosell. ABC would show select plays from subset of the Sunday games using NFL Films footage. Here, Cosell became the villain to many fans who would blame him if their favorite team wasn't shown on the highlight package. A bar in Denver actually conducted a weekly drawing with the winner getting to throw a brick at an old black & white TV when Cosell appeared on the screen. 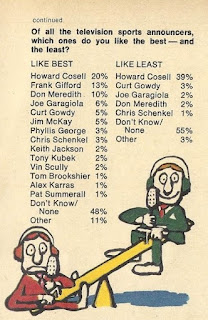 Cosell always seemed to relish his role as the announcer that viewers loved to hate. He took the same approach in the way he portrayed himself in movies and guest appearances on sitcoms such as The Odd Couple.

In 1978, TV Guide conducted a survey to determine which TV sports announcers were the most liked and least liked by viewers. Cosell famously finished first in both categories! Of course, in the polling for least liked, the margin was overwhelming.

Cosell surfaced as a prominent villain in other sports as well. ABC acquired Major League Baseball rights in 1976, but suffered disappointing ratings for its first season of Monday Night Baseball and received poor reviews for its initial lead announcer team. As the postseason approached, the network performed a major overhaul of its broadcasters and unveiled plans to install Cosell for the ALCS. MLB commissioner Bowie Kuhn strongly objected because of comments by Cosell in recent years about how dull baseball had become. But Arledge held the trump card as the contract he had signed with MLB gave ABC the final say over announcers. So Cosell worked the playoffs and became a regular member of Monday Night Baseball the next season. 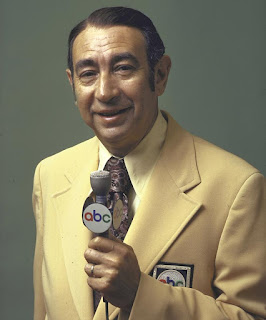 When ABC first bid for the TV rights to the 1976 Summer Olympics, the Montreal Olympic Committee tried to make the bid conditional on ABC not using Cosell on the telecasts. Again, Arledge won out as ABC got the rights and Cosell was ringside at the boxing venue.

Cosell called most of the key boxing matches on ABC during the 1970s. In 1982, he was at the mic for the Larry Holmes title fight against Randall "Tex" Cobb. The bout was extremely one-sided and Cosell, via his on-air commentary, implored the referee to stop the fight and expressed disgust that the match was allowed to go the distance.

Soon afterwards, Cosell declared that he was done with professional boxing and called for its abolition. Of course, he was lambasted by many in the press who viewed his stance as hypocritical since boxing was the sport where he first rose to prominence in the 1960s. He never worked another pro fight (although he did call amateur bouts during the 1984 Olympics).

Being a villain to the print media was nothing new for Cosell. He had a longstanding feud with sportswriter Dick Young of the New York Daily News who frequently attacked Cosell in his columns. He was also harshly criticized by Sports Illustrated for an interview he conducted with USA track coach Stan Wright during the 1972 Munich Olympics after a time schedule foulup caused two top USA sprinters to be disqualified.

In 1983, Cosell became a villain to the press once again when he used the phrase "little monkey" while praising Redskins wide receiver Alvin Garrett during a MNF telecast - which some perceived as racist. Later in that game, Cosell made the situation worse by issuing an on-air denial that he had used such a term. Despite the fact that Cosell had been a longtime supporter of civil rights, he was the subject of countless negative newspaper headlines over this incident.

Cosell was notorious for consuming alcohol before and during his telecasts. He famously left a Monday Night Football  telecast mid-game in Philadephia in 1970 after being drunk on the air and vomiting on Meredith's boots. His heavy drinking during the 1984 baseball playoffs also caused a major rift with Al Michaels. 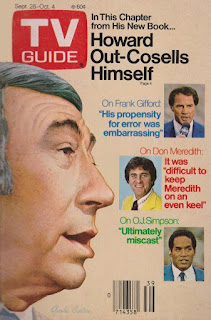 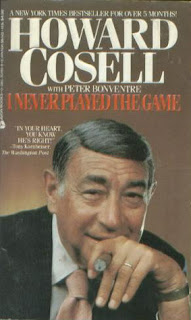 Cosell became the villain yet again, this time to his entire industry, with the publication of I Never Played The Game in 1985. In the book, he blasted several of his former TV colleagues including Frank Gifford, OJ Simpson, and Meredith. Less than two weeks before the start of the 1985 World Series, ABC removed Cosell from its planned Fall Classic telecast team.

Also, in that book, Cosell wrote that in 1984, he received a call from Vince McMahon, chairman of the World Wrestling Federation. It turned out that McMahon wanted to hire Cosell to be the primary announcer for WWF wrestling telecasts. Cosell turned him down, but I find it intriguing to envision Cosell (the ultimate villain announcer) calling staged matches for McMahon's company at a time when professional wrestling was about to boom in popularity. McMahon went on to successfully feature many villain announcers of his own such as Bobby "The Brain" Heenan and Jesse "The Body" Ventura.

Howard Cosell was an absolute giant in the sportscasting industry. He dominated virtually any telecast in which he appeared and had the ability to elevate the perceived importance of each event. But, throughout his career, Cosell was seen as a villain by numerous entities - viewers, advertisers, league commissioners, sportswriters, and broadcasting colleagues - a true black hat in the booth.

This post is part of a Classic TV Villain Blogathon hosted by Classic Film and TV Cafe. Please check out the complete schedule of blog posts for this event.
Jeff Haggar at 9:04 PM
Share