40 years ago today, Dick Vitale made his debut on ESPN as the analyst on the 12/5/1979 Wisconsin @ DePaul game with Joe Boyle on play-by-play. Over the years, many sources have cited this as the first-ever college basketball telecast on ESPN which was launched three months earlier. But was it really the first? 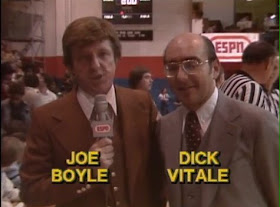 For example, a Sarasota Herald Tribune article from 2018 stated:


On December 5, 1979, ESPN broadcast its first college basketball game, DePaul versus Wisconsin, and Vitale, fired a month earlier as head coach of the NBA’s Detroit Pistons, provided the color.

A story on the Detroit Titans official site discussing the court named after Vitale said:

Even the bio on Vitale's own website makes this incorrect claim:

I have to admit that this blog relied on such sources and made the same claim in 2012.

However, the Vitale TV debut was not the first college basketball game on ESPN. I found a 12/3/1979 article from the New York Times archives which reviewed some of the programming from the prior weekend on the new cable network and showed that ESPN televised at least five college basketball contests before the 12/5 Vitale appearance:

St. John's vs Oral Roberts
Michigan St. vs Princeton (this was a semifinal doubleheader from the Joe Lapchick Memorial Tournament)

Some references to the Wisconsin @ DePaul game claim that it was the first "major" college basketball telecast on ESPN. Here is an ESPN bio of Vitale

However, the 12/1 Lapchick Tournament title game featured #16 ranked St. John's against reigning national champion Michigan St., so that claim of first "major" seems faulty.
I also found an interestingly worded reference in the 2015 book Every Town is a Sports Town by former ESPN president George Bodenheimer:


Dick Vitale did the very first national basketball game that ever aired on ESPN (a DePaul victory over Wisconsin).

I'm not sure what to make of the "national" qualifier on this statement as I believe all ESPN programming at that time was "national" (at least across the subset of cable system that actually carried the network at that time).

According to my research, the only college basketball game during the 1979-80 season which took place prior to 11/30 was the Hall of Fame Tipoff Classic which was televised by TVS. So that fact combined with the above NY Times article appears to confirm that the St. John's vs Oral Roberts matchup (which opened the Lapchick doubleheader) was the first-ever ESPN college basketball telecast.
Jeff Haggar at 2:51 PM 2 comments:
Share
‹
›
Home
View web version